A Unique Story of Creating Narrative Through Visual Content 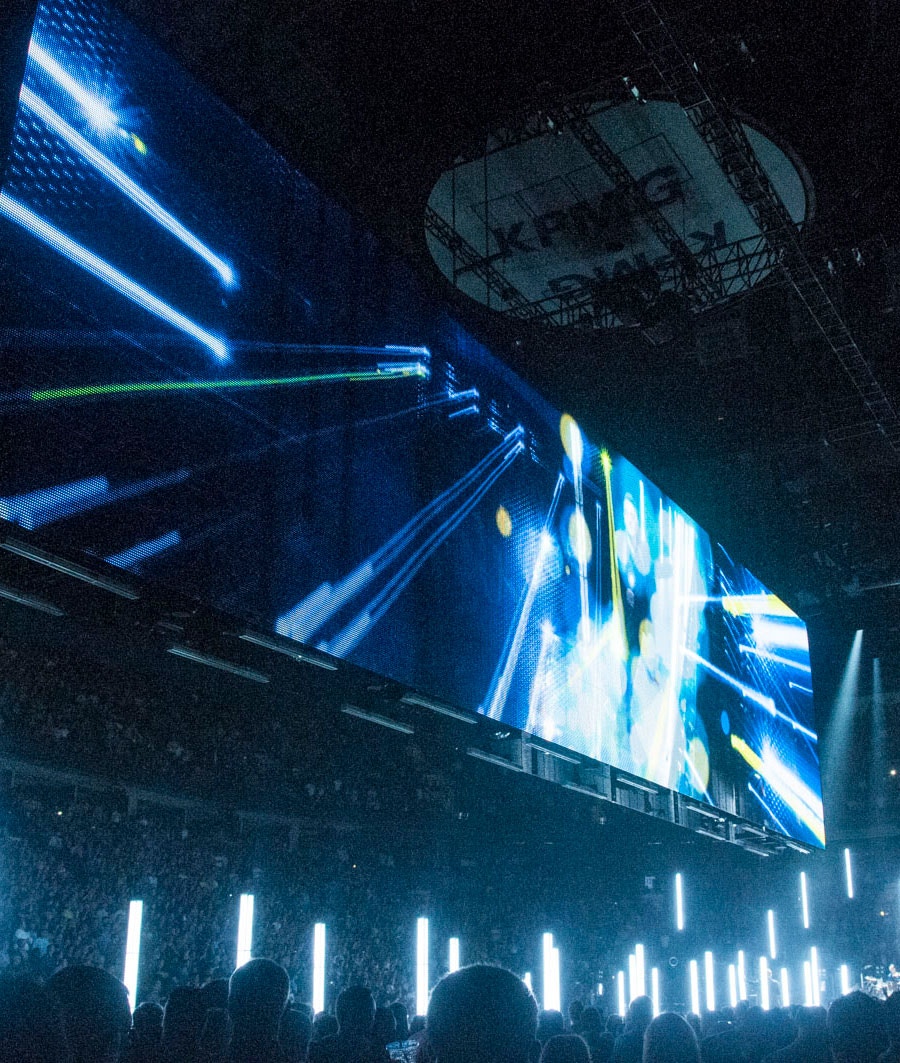 In the spring of 2013, U2 gathered with their creative team for a summit weekend in the south of France. This is usually the way at the very beginning of a U2 live show cycle; we might not have seen each other for a year or more, so there will be new music to hear, new experiences to share, new ideas to explore. Mark Fisher was there, Gavin Friday too, Morleigh Steinberg, Sharon Blankson and two newcomers, Ric Lipson from Mark’s studio and Es Devlin - then a designer of theatre & opera whose reputation for ‘interrogation of narrative’ we were keen to bring in to the fold. Far from being a ‘design’ meeting, we spent the entire weekend in conversation, digging into the idea of using the next two years to tell a story; a story that would be very personal to U2 but also universal, as all great stories are. Hung on the pegs of William Blake’s Songs of Innocence and of Experience, the members of U2 wanted to dig deeply into their own personal experience, to see if perhaps there was a more comprehensive story there.

We spent the whole of Friday night excavating the communal past of U2’s Dublin childhood. Gav & Sharon grew up with them and so shared the stories from multiple angles. It was wonderful to witness; a community so intimately entwined that dragging up even just a single name from the past could have the whole room falling about laughing. We heard all about adventures on Cedarwood Road. The giving of new names; The crazy Rowen family who kept a pet wolf and stored a mountain of car tyres in the front yard; the single cherry tree on the drab street which gave displays of extravagantly colourful blossom each spring. We heard about the day that Guggi showed up on a wild horse. We heard about the telephone box that, in the days where private phone lines were still far from ubiquitous, served as a hub of social activity. A place where the LP you were carrying was a social identifier; a place where personal style was a statement of intent, though often one that carried great personal risk in the face of disapproving skinheads. 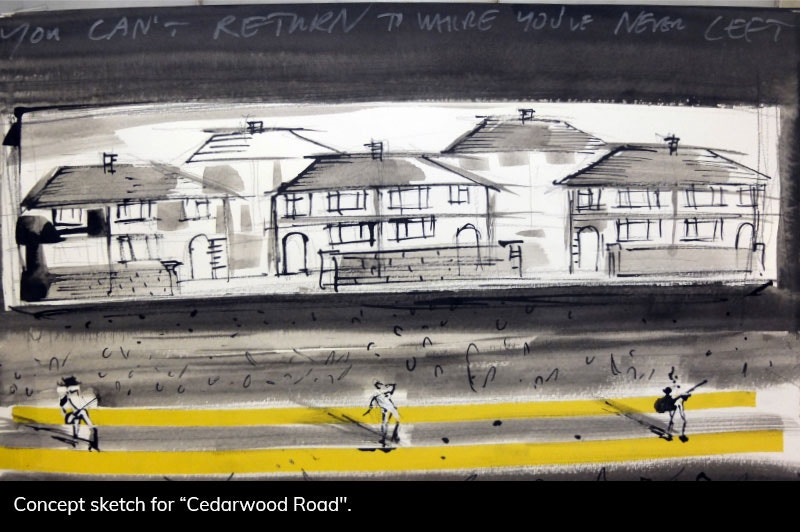 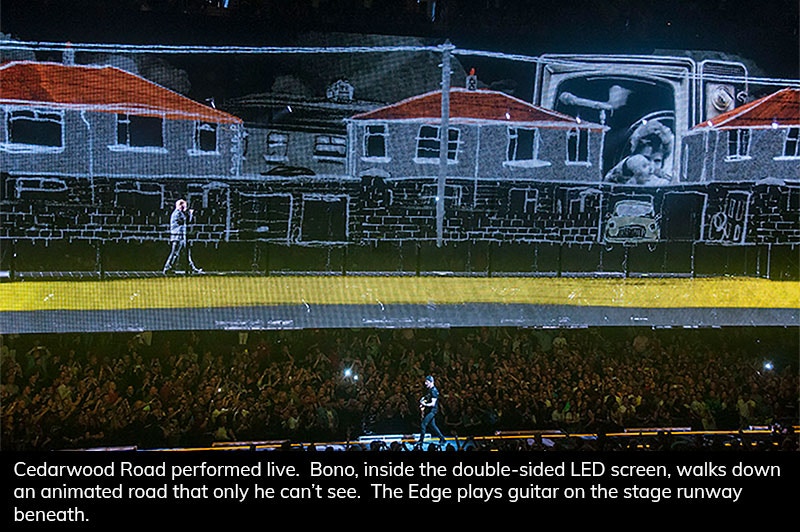 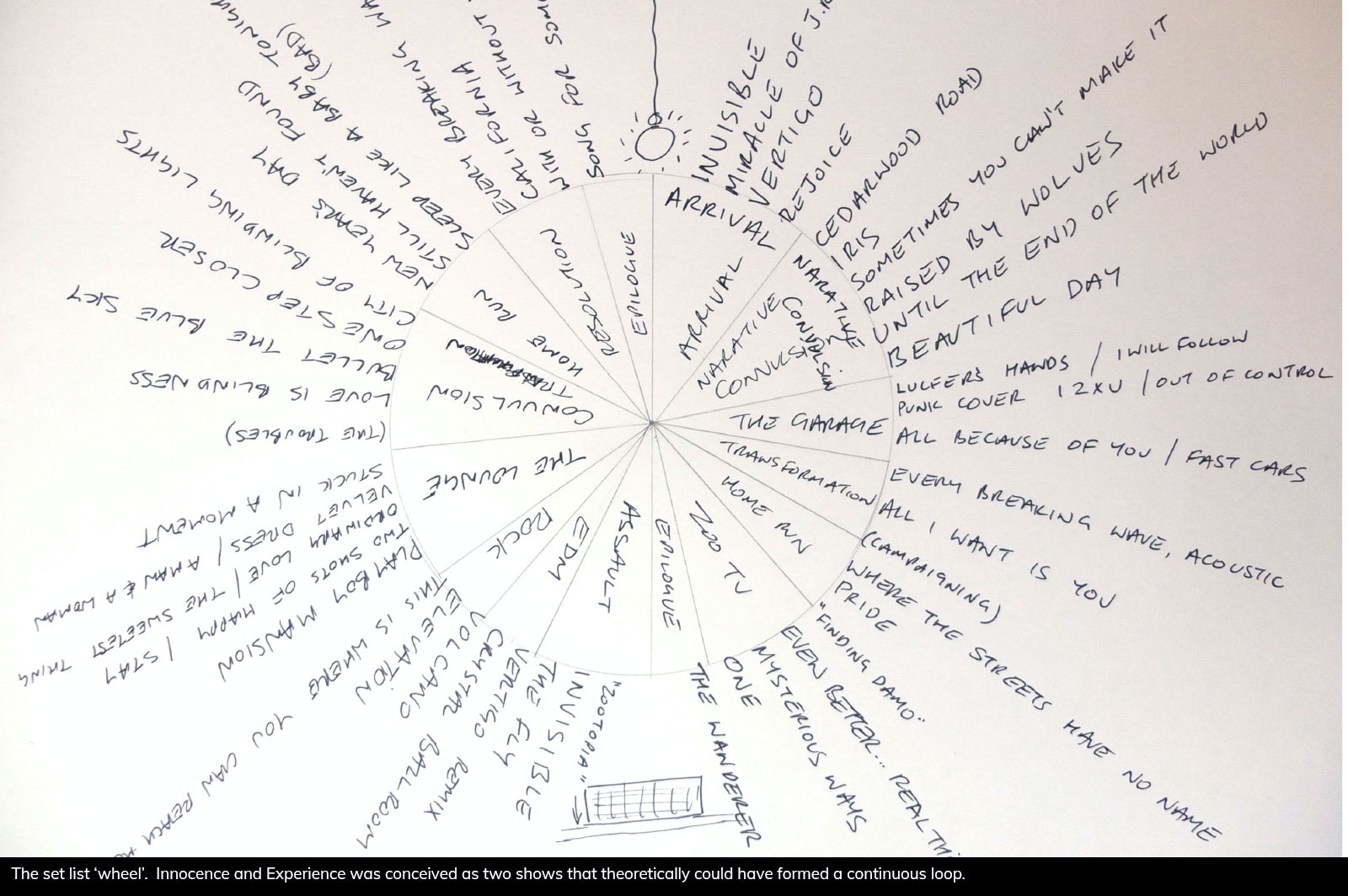 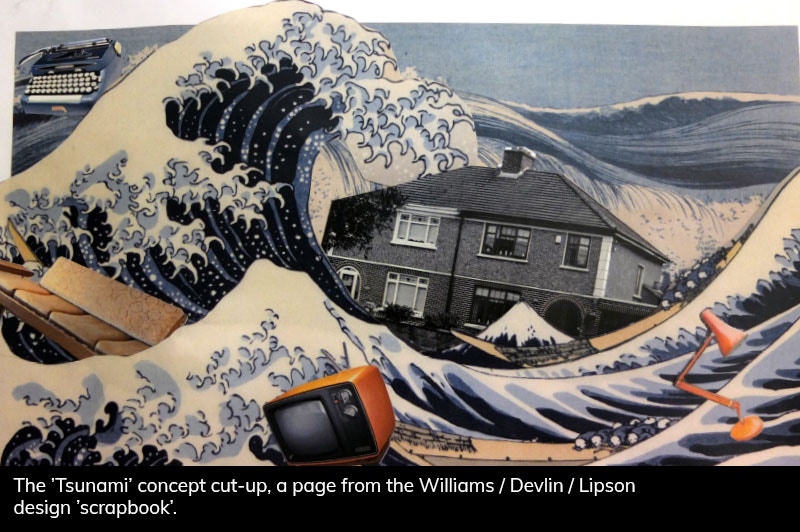 U2 was planning to release a pair of albums; first, Songs of Innocence, to be followed a year later by Songs of Experience. Consequently, we conceived the Innocence + Experience tour as two shows to be played on consecutive nights, each based around its accompanying record. Eventually, realising that this would necessarily involve playing an enormous amount of then-unreleased material, we recalibrated the idea, planning the Innocence tour for one year to be followed by the Experience tour the next.

An extremely unusual aspect of this project was that for a long time the physical design of the show took a back seat to the narrative; what it was going to look like was almost an afterthought to understanding the story we wanted to tell. Instead of the usual blueprints and CAD models that normally accompany the beginning of a new project, we decided just to make a scrapbook – a physical, large-format, hard copy scrapbook of images, sketches, paintings, notes and any other references that we felt had resonance - oh, and a roll of yellow gaffer tape that became disproportionately inspiring for reasons I forget now. 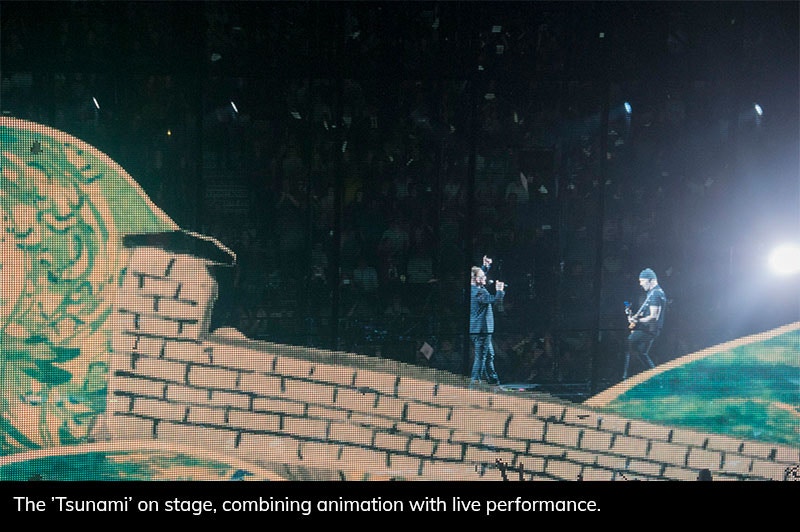 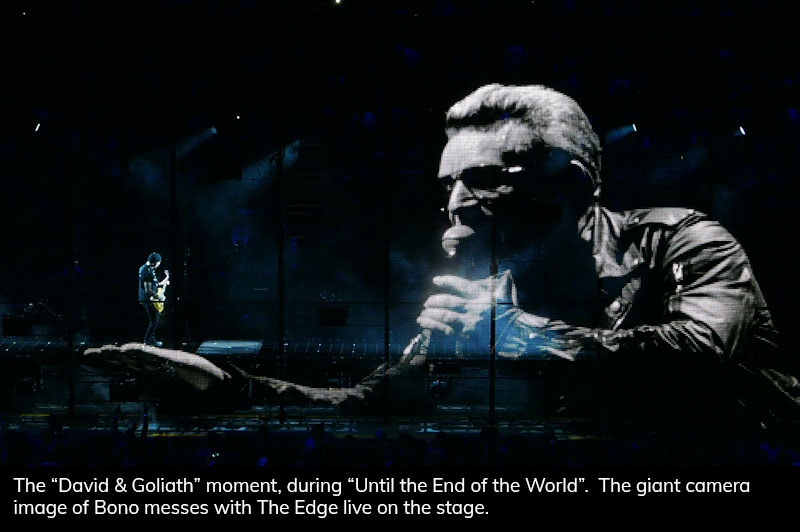 Even the set list process was unusual. Having planned the broad strokes of ‘night 1’ and ‘night 2’ song sequences, we realised that, having arrived at the end, the whole cycle could start again. The set list became a wheel of 60 songs from which you could pick any two opposing points to be the beginning and the end.

The Innocence tour ran for a year and then somehow life got in the way; a short hiatus became a year and then someone noticed that The Joshua Tree was having a birthday. A thought arose - prior to the Experience tour, wouldn’t it be fun to do just a couple of Joshua Tree anniversary concerts? It would fit thematically, acting as a kind of bridge between innocence and experience, as indeed that album did in U2’s real life. “A couple of anniversary concerts” turned into fifty stadium shows worldwide and another year going by, but it was one hell of a birthday party. 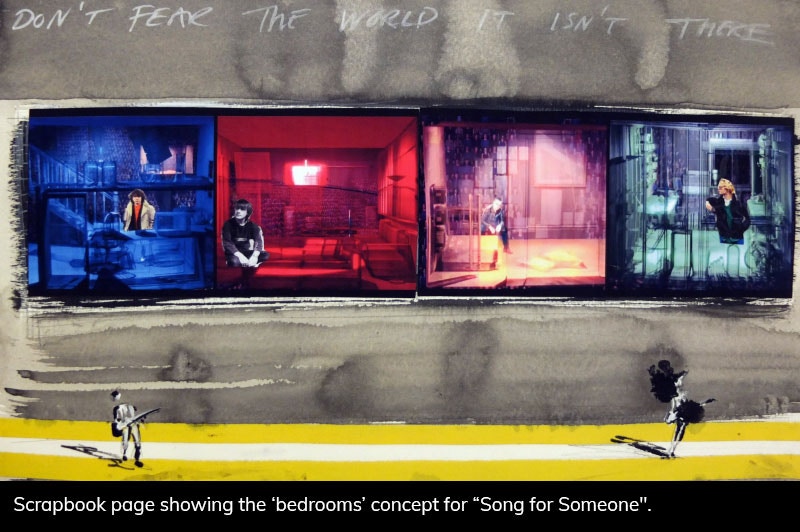 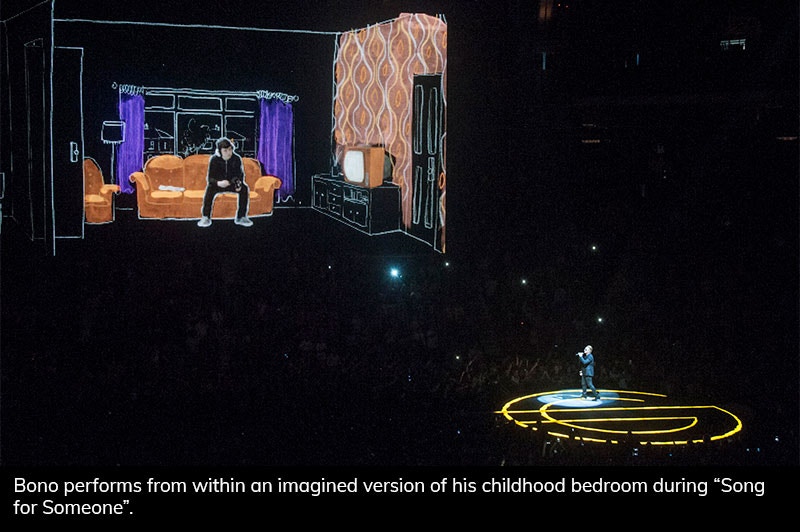 Time and again over the course of the Innocence + Experience project, we have referred back to the scrapbook and to the notes we took over that initial weekend. Remarkably, the whole of the story is there, right from the beginning; it just took us a while to figure out how best to present it.

Bono had long said that, to follow the gargantuan U2360 tour, U2 should open their next show beneath a single, naked light bulb. As we dug into the Dublin story, the light bulb became more specific; it was the naked light bulb that hung in Bono’s childhood bedroom, the box room of 10 Cedarwood Road on the north side of Dublin. We went on to discover that a whole universe was contained within that light bulb; a universe of possibilities that became a portal to the world outside. 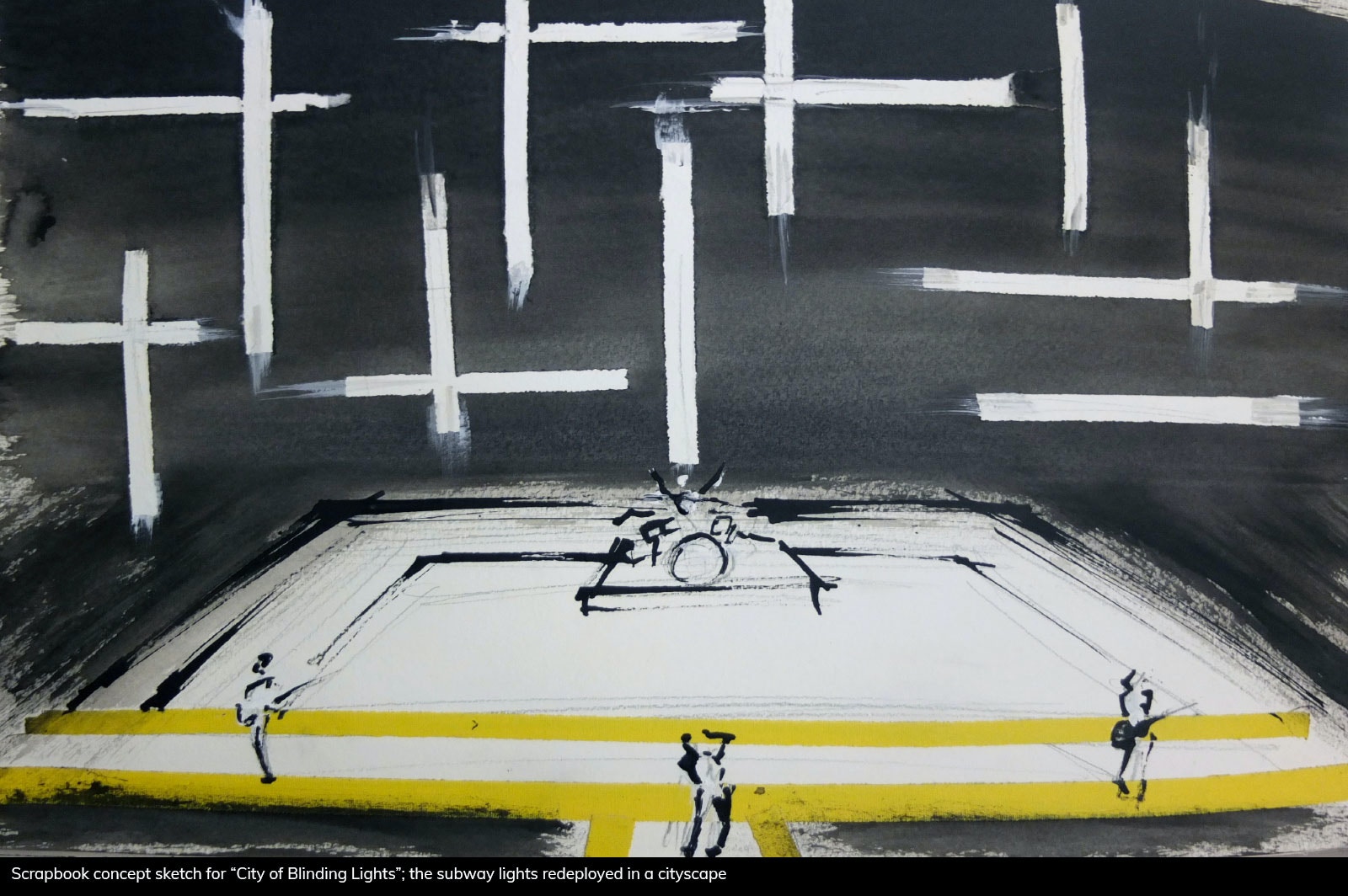 There was darkness too, in the shadows cast by the protective glow of the light bulb. There was violence in the story, both internal and external; there was illness and death, both in the memory of Bono losing his mother so young, and in the present day when we lost Mark Fisher to cancer midway through the design process. The end of innocence; the smashing of the lightbulb. There was the oppression of dogma and there was the Faustian pact of fame; an enticing escape, but too often a one-way ticket into all-consuming ego. If the bedroom could be escaped, then this maze would have to be negotiated in order to find a new home.

Initially when we’d talked about ‘the journey home’ I think we had something reassuring and faintly cosy in mind; some kind of rescue from the darkness. However, as time went by and as real life continued to intrude, we came to realise that perhaps the journey we were talking about was the soul’s ultimate voyage; that post-mortem walk toward the white light in the distance. 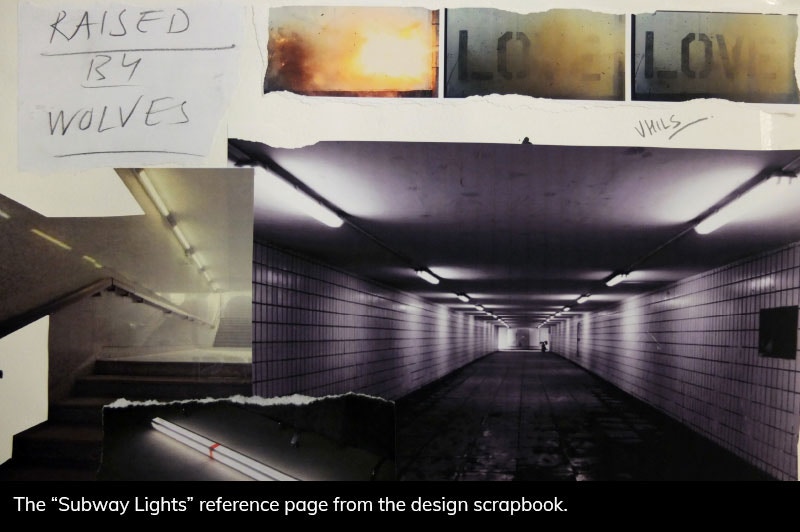 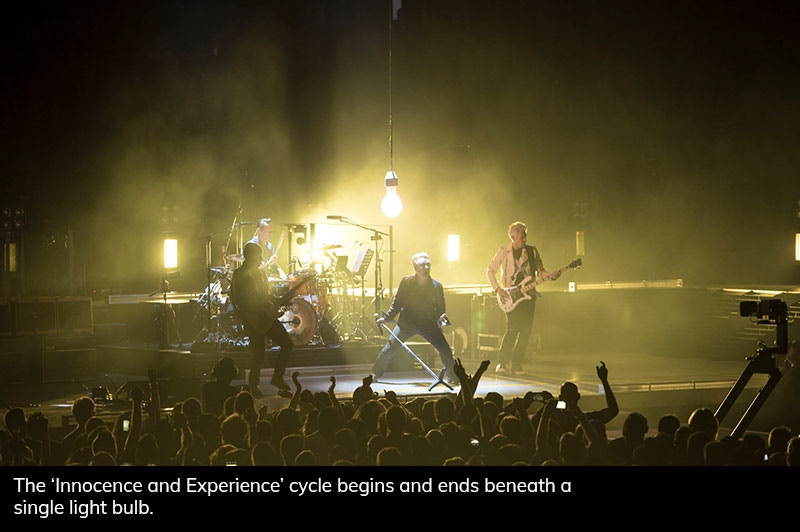 Lyrically, much of the Songs of Experience album was informed by Bono facing his own mortality on a couple of occasions, most famously when his head had an extremely close encounter with a large rock in Central Park, having come off his bicycle at high speed. Remarkably though, the show based on this ‘journey home’ also contained a great deal of joy & catharsis, there was spectacle & silliness, but as ever with U2, it had to be about music above all else.

At the end of the show, Bono walks the length of the stage, traversing the entire audience. Magically he discovers a ‘doll’s house’ model of his home from Cedarwood Road. The unhappy house of his childhood, so overwhelming in his youth, has now become just a small, comforting memory. Out of it he pulls the glowing light bulb that began the Innocence show and leaves it hanging for the audience as he quietly walks through the crowd to go home.